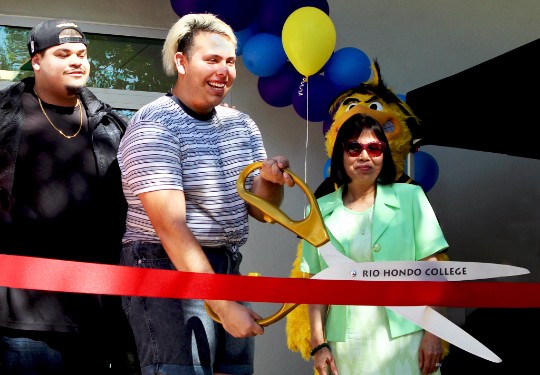 October marked a month of significant milestones and recognitions for Rio Hondo College, all carrying the same theme: service to students.

Rio Hondo College was honored with a Diversity Champions Award in recognition for our extraordinary Pathway to Law School program, which guides students from community college, through four-year universities and to one of the six partnering California law schools.

The award recognizes our success with the program, which graduated 24 students in spring 2017.

Just a day later, the College celebrated the opening of a food pantry and students resource center called the RioSource Room. This service, which grew out of years of planning, will help our neediest students continue their education without the chilling fear of going hungry.

That challenge is a reality for far too many of our students and I’m proud of the collaboration between our Associated Students of Rio Hondo College and our Food Access Task Force for leading the way to this much needed service.

Our students also collected more than 3,000 letters of advocacy for replacing the Deferred Action for Childhood Arrivals (DACA) program that is being phased out by the Trump Administration. That number speaks to the incredible compassion of our campus community.

Finally, we also hosted a visit from students of a local school district who are in out-of-home and foster care placements. These students also need compassionate support so they have every opportunity for achieving their college and career goals. I’m proud that Rio Hondo College is taking the initiative to be a part of the solution.

The pantry culminates efforts by the College’s Food Access Task Force and the Associated Students of Rio Hondo College (ASRHC) to combat food insecurity on campus for the last two years. Those efforts include a fall 2016 survey, snacks made available for students on their way to classes, Food Break stations during finals week and free groceries at the end of the 2016-17 academic year.

The launch included a town hall highlighting the impact of food insecurity, defined as a lack of access to a sufficient quantity of affordable, nutritious food.

Rio Hondo College students surveyed in fall 2016 said they worry over feeding themselves and families, including 35 percent who skip meals because they lack money. More than half the surveyed students who receive financial aid said they spend at least some of those funds on food.

The RioSource Room, located in the Administration building next to the Rio Hondo College Bookstore, will serve as a drop-in pantry for students who need food while on campus or groceries to take home. It will also host information about local nonprofit and community resources, including state food aid, shelters, health providers and mental health services.

The pantry will be supplied with aid from Food Finders, Heart of Compassion and Emmanuel Presbyterian Church Food Bank, which have donated items for past food efforts. President Dreyfuss pledged $25,000 from the College as ongoing support.

Andrew Gonzalez, ASRHC president in 2016-17, led efforts to create the pantry. Gonzalez, who transferred to Cal State Fullerton, returned for the opening. He shared how, while homeless, he once slept in his car and showered at Rio Hondo College.

Martin Cuvarrubios, the current ASRHC president, thanked President Dreyfuss for pledging financial support and for allocating the space for the resource room.

“We all know space is hard to get at Rio Hondo College,” he added.

The event included comments from Student Trustee Pariss Youngblood and Board of Trustees member Madeline Shapiro. Grocery bags of food were handed out to students following the event. For donations, please call (562) 908-3427 to schedule a dropoff.