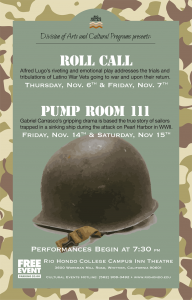 Rio Hondo College’s Division of Arts and Cultural Programs will present in early November two original plays written by members of the college community that explore the experiences of America’s military veterans.

Roll Call, by Alfred Lugo, takes place in a local Veterans of Foreign Wars hall, where young Latino vets just back from Vietnam come to grips with their experiences in the war and their reception back home. The play will be performed Nov. 6 and 7.

Pump Room 111, by Gabriel Carrasco, is set just before and during the attack on Pearl Harbor, and is based on the true story of men trapped inside a sinking battleship. The production will be staged Nov. 14 and 15.

“Rio Hondo College has long worked to create a supportive environment for both veterans and active duty military personnel,” said Superintendent/President Teresa Dreyfuss. “We have a very active Veterans Club and a highly regarded Veterans Service Center, both of which have been really instrumental in putting on these shows.”

College leaders decided to add the performances to their annual observation of Veterans Day because this year marks the 100th anniversary of the start of World War I.

“We hope to capture the wide range of experiences that Rio Hondo veterans and their families have had over the last 100 years,” said Chris Guptill, Dean of Arts & Cultural Programs. “There will be a display of uniforms, photographs and artifacts from World War I through today.”

Alfred Lugo, who wrote Roll Call, served as a U.S. Air Force crewman in Vietnam. He has written and produced several documentaries about America’s Latino war heroes. He currently serves as a member of the President Advisory Council.

Following the Nov. 6 performance of Roll Call, Lugo will moderate a panel discussion with representatives of veterans and service groups on the mental health issues facing today’s veterans, active-duty armed forces and their families.

Both plays will be held at 7:30 p.m. in the Campus Inn Theater at Rio Hondo College. The shows are open to the public and free of charge. Parking is $3. For more information, call (562) 908-3492 or go to www.riohondo.edu/arts and click on the Arts & Cultural Events tab.