Home / Board of Trustees / Gary Mendez 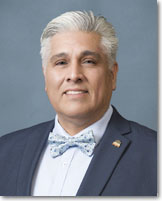 Gary Mendez was first elected to the Rio Hondo Community College District Board of Trustees in November 1999. He was re-elected in 2003, 2007, 2011 and 2015. Mr. Mendez represents Trustee Area 4, which includes Los Nietos, Santa Fe Springs, South Whittier and North Norwalk.

The most senior member of the board, Mr. Mendez was first elected in 1999 and has served five consecutive terms on the Board of Trustees.  Mr. Mendez represents Area 4 which includes the communities of Los Nietos, South Whittier, North Norwalk, the City of Santa Fe Springs and a portion of the City of Whittier.  Mr. Mendez is proud to serve the communities where his family has lived for over 130 years.

Mr. Mendez is a former Rio Hondo College student who served as the Student Trustee on the College Board and where he earned a degree in Paralegal Studies and Political Science before transferring to California State University, Sacramento.

Close to his heart, Mr. Mendez authored and designed the initial rendering for the Rio Plaza Transportation Center at the bottom of the hill.  The Intermodal transportation center will provide increase access and accommodations for bus, bicycle, rideshare and pedestrian students with restrooms, bike lockers, vending machines, shaded seating areas and handicap access. “As a student, I either walked, rode the bus, rode a bicycle or bummed a ride to Rio Hondo.  This center encompasses all of those modes of transportation and more,” said Mr. Mendez.

Mr. Mendez has spent most of his career in public service where he served as legislative assistant for the Chief Clerk of the California State Assembly in Sacramento, field deputy for two California State Assembly Members, special assistant to a Member of the U.S. House of Representatives, specialist for the U.S. Department of Commerce and as a ranger on Santa Catalina Island.  He is an active Karate Sensei and fifth degree (Godan 五段) Black Belt in Shorin Ryu Matsumura Seito Karate (少林流松村正統空手)and Kenpo Karate.

Mr. Mendez is the Chief Executive Officer of a Non-Profit dedicated to serving children, youth and families in disadvantaged communities.