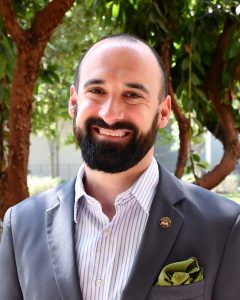 Dr. Grant Linsell is the Dean of Arts and Cultural Programs at Rio Hondo College in Los Angeles County and is a sought-after conductor, clinician, and clarinetist. He has served as the Director of Instrumental Activities at Mt. Hood Community College in Gresham, OR and has held similar appointments at Willamette University in Salem, OR, Minot State University in Minot, ND, and Lansing Eastern High School in Lansing, MI. He works with many ensembles – from middle school to professional – across the United States and Canada. He also researches, writes, and presents internationally on music and music education. His main interests are electroacoustic clarinet composing/performing, the music and life of Igor Stravinsky, curriculum development, and conducting pedagogy, but he also gives informal lectures on the neuroscience of music. A native of Detroit, MI, Dr. Linsell attended the University of Michigan and received his Bachelor’s degree in Music Education and Clarinet Performance. There, he studied clarinet with Deborah Chodacki and Fred Ormand and played in H. Robert Reynolds’ Symphonic Band and the Michigan Marching Band. He holds a Master’s degree in Instrumental Conducting from the University of Oregon (where he studied with Bob Ponto) and a Doctorate in Wind Ensemble Conducting from Arizona State University (where he studied with Gary W. Hill). At ASU, he was a research fellow at the Intelligent Stage Motion Capture Facility in the Arts, Media, and Engineering Program where he worked on computer-aided conductor motion analysis and on developing a conductor driven and musically responsive computer system – the only such system in the world. 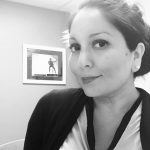 Wendy has worked at Rio Hondo since 1999.  She began her career at Rio Hondo as a student worker, and became the Division Secretary for the Arts and Cultural Programs in February of 2016.   Wendy loves the arts and is thrilled to get to work in an area surrounded by it.  When time and opportunity permit, she can be found moonlighting as a concert photographer or coming up with outlandish Halloween themes for the office.   Her work can be found in various bands websites, and in an upcoming movie in 2017, but if you blink you might miss it.  She is also working on merchandise featuring her past work.

Abby has worked at Rio Hondo College since the beginning of 2017.  She earned her degree in Sociology from Cal State Fullerton with a minor in English.  She works behind the scenes on all the logistical needs for each event as it relates to Theatre, Music, Dance and Art as well as the Family and Community events the college offers.  She can often be found spending weekends attending community events, art exhibits and live music.

Gabe attended Rio Hondo College in the 1980’s. He received his Bachelor’s Degree in Theatre from Cal State San Bernardino.  Gabe has worked at the Mark Taper Forum and La Mirada Theatre Center, as well as many area theaters as a carpenter, properties artisan and technical director.  Gabe is also an accomplished actor and an aspiring playwright, loves karaoke, long walks in the moonlight and is fond of German lagers.  He has traveled and performed with Rio Hondo theatre students to the Edinburgh Fringe Festival and to our sister city, Changshu, China.

In addition to serving as Rio Hondo’s Cultural Events Coordinator, Miyo is a full time Photography instructor and Los Angeles based artist working in a variety of media which include photography, drawing, embroidery, and various printmaking mediums. Her imagery explores issues of ancestry, migration, feminism, cultural identity, and environmental degradation. She received her BFA from the California College of the Arts, and her MFA from the California Institute of the Arts. Miyo Stevens-Gandara has work in the collections of the Los Angeles County Museum of Art, Museum of Latin American Art (MoLAA) Riverside Art Museum, and various private collections. Her work has been exhibited in the U.S. and internationally.  Miyo has a strong commitment to her community as part of her art practice and has been involved in nonprofit arts outreach programs throughout her career.

Dave began his work in the theatre in 2014 as a photography student right here at Rio Hondo. He was awarded Federal Work Study, and the only opening available at the time was at the Wray Theater. Although he had never worked in a theater before, and had very little knowledge of the technical side of theatrical production, he dove right in. In his first week of working in the theater he fell in love and wanted to learn as much as he could. He made it a point to absorb every bit of knowledge from the theatre staff and faculty, and now he is proud to work as the Theatre Technician alongside the same amazing people to taught him so much.