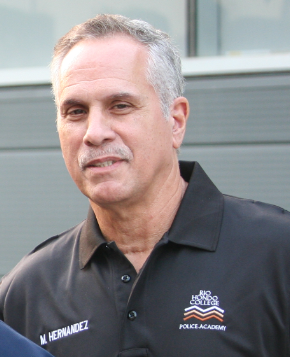 Milt is a retired LAPD Sergeant.  He graduated from Azusa Pacific College where he earned his BA in Psychology then hired by the Los Angeles County Probation Department for approximately two years.  Milt then went on to get hired by the LAPD in 1982, spent 31 years serving the city.  Milt was a Patrol officer and Training officer; worked gangs, narcotics, and was also assigned as an instructor for the LAPD academy as a Physical Training Self Defense Instructor.

Milt was promoted to Sergeant in 1998 and was assigned to the DARE program, the Rampart Investigation Team, and the Community Relations Officer in Charge for the Hollenbeck Area.  He spent the last three years at LAPD Training Division as a Recruit Basic Course Sergeant prior to retiring.

As a Rio Hondo Police Academy Coordinator, he is responsible for overseeing everyday operations for the Police Academy and the 832 PC program.  Milt ensures that the Academy and all its related programs are in compliance with POST Standards and Training.  He has the responsibility to monitor and verify legislatively mandated training.  His purview includes monitoring and reviewing of instructor lesson plans and all testing forms for completeness, random classroom observations, along with verification of legislatively mandated exercise tests.

David has been a Coordinator with Rio Hondo Police Academy since 2016 and as an Instructor since 2013.  His primary duties include oversight of the day to day operations of the Academy and maintaining compliance with State of California Peace Officer Standards and Training requirements.  David specifically manages Scenario Training and Force Training for the Rio Hondo Cadets

David is a retired Sergeant of 28 years from the Los Angeles County Sheriff’s Department where he held assignments in Custody, Patrol and Training at the Sheriff’s Academy.  David also serves as a subject matter expert conducting Basic Academy Curriculum Reviews for POST throughout California. He serves on the Board of Directors of the California Police Athletic Federation who facilitates the annual United States Police and Fire Championships and the bi-annual World Police and Fire Games.

David is a 5-time World Games Gold Medalist in the “Toughest Competitor Alive” event. David has a B.S. Degree in Recreation Administration from Fresno State university.

Luke has trained a large number of Police Officer Trainees wherein his passion for the Law Enforcement profession is always clearly manifested,  along with his strong belief that the core training starts here.