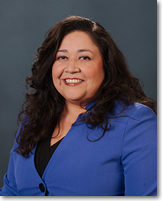 Ms. Santana was elected to the Board of Trustees November 8, 2011 and re-elected in 2015 and 2020. She represents Trustee Area 2 which includes the City of Pico Rivera and West Whittier.

Vicky Santana is a Manager of Human Resources for the County of Los Angeles Department of Parks & Recreation. Previously, she worked for the Los Angeles County Probation Department after having served for seven years with Los Angeles County Supervisor Gloria Molina as Senior Justice Deputy, of which five years she also was the supervisor’s Education Deputy. During this time, Santana oversaw $4 billion worth of law enforcement-related budgets, and worked directly alongside the supervisor to significantly increase Sheriff’s Deputy patrol levels in unincorporated neighborhoods, like West Whittier, for the first time in 30 years.

In her educational capacity with the supervisor, Santana helped roll out the LA Universal Preschool (LAUP) initiative to provide preschool to all four-year-olds in underserved communities – including Pico Rivera and West Whittier. Santana also monitored the Los Angeles County Office of Education, the largest HEAD Start program administrator in the nation.

Born in East Los Angeles and a product of the Montebello Unified School District, Santana graduated at the top of her Bell Gardens High School class, and was the first in her family to attend an Ivy League institution: Columbia University. She attributes her escape from poverty to the education she obtained at Whittier College, where she earned a Bachelor’s degree. Santana then spent several years in the private sector, but when she unexpectedly received the opportunity to study at Harvard University’s prestigious Kennedy School of Government, Santana took it, and ultimately graduated with a Master’s Degree in Public Policy.