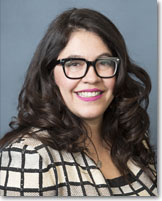 Ms. García was elected to the Rio Hondo Community College District Board of Trustees in November 2009, 2013 and re-elected in 2018. She represents Trustee Area 1 which includes City of El Monte.

Norma Edith García attended Citrus Community College, transferred and graduated from UCLA, earning a B.A. in Political Science and M.A. in Urban Planning. She was appointed as Chief Deputy Director of the County of Los Angeles Department of Parks and Recreation in September 2016.  She is the first woman to serve in that capacity and executive role in the Department since it was created in 1944.  In her role, she is responsible for the Department’s day-to-day operations of 182 facilities that includes an annual budget of $200 million, more than 1,600 full-time employees, 1,700 part-time employees and 6,477 registered volunteers.

Before her recent appointment, she held the position of Deputy Director of the Department’s Planning and Development Agency.  In her 13-year career with the Department, Ms. García has led the Department’s strategic efforts in planning, acquisition, development, and asset management of 71,249 acres of parkland and 210 miles of trails.  In 2015-2016, Ms. García led the Los Angeles Countywide Parks and Recreation Needs Assessment, an effort unprecedented in scope and scale, that quantified the need for parks and recreation resources in Los Angeles County (including 88 Cities and 156 Unincorporated Areas) and estimated the potential cost of meeting that need. Holding over 140+ community engagement meetings and engaging thousands of community members, this effort served as the groundwork for Measure A: Los Angeles County Safe, Clean Neighborhood Parks and Beaches Measure of 2016 which was passed by the voters with nearly 75% approval rating.

Ms. García is an ardent believer of lifting up children, families and strengthening communities throughout the County, and works tirelessly to achieve this through her active participation in many civic and professional organizations.  She currently serves on the Governing Board of Trustees for Rio Hondo College, the Board of New Economics for Women and the El Monte Promise Foundation.  Ms. García’s work has been highlighted by the White House Initiative on Educational Excellence for Hispanics in 2015 and invited to the White House by President Barack Obama.  In 2016, Ms. García was invited to participate and share the stage with former President Clinton at the Clinton Global Initiative America.  Ms. García received the 2017 First District Women of the Year by the Los Angeles County Commission of Women and Supervisor Hilda Solis and the 2018 Woman of the Year for the 22nd California Senate District.  Ms. García is a graduate from the Hispanas Organized for Political Equality (HOPE) Leadership Institute and was awarded a Conflict Resolution Fellowship through the U.S. State Department in Indonesia.

Ms. García graduated from UCLA, earning a B.A. in Political Science and M.A. in Urban Planning. Ms. García and her adventurous family of boys and huskies enjoy California road trips and everything about parks.